We've all seen movies we just thought, wow, that was bad-ass. Then after thinking about the movie for a while realize that it was really just a piece of crap or that it was so good we'll never watch it again. Well, here are my top ten movies that I thought were completely badass, but I'll never watch again.

What it's about: A child psychologist, Malcolm Crowe (Bruce Willis), is visited one night by an ex-patient named Vincent Gray who he failed to help. Angry and enraged, Vincent shoots Crowe in the stomach, then kills himself. Months later, Crowe is visited by a 9-year old boy named Cole who has the same problems Vincent had. Crowe sees a chance to redeem himself, but Cole insists that he sees ghosts who don't know they're dead.

Why I'll never watch it again: Once I saw the end of the movie, I felt no need to watch the film again. It also left many questions. How did he not know he was dead? Yes, he saw what he wanted to see, but he never noticed people not paying attention to him or that he doesn't ever get hungry or thirsty? What about when he takes his shirt off, do the other ghosts not look at him weird? And why does Cole get scared of every ghost but Crowe?

What it's about: A Neo-Nazi skinhead named Derek Vinyard is sentenced to prison for three--yes three--years in prison for the murder of two black men who tried to steal his truck. When he is free, he is a changed man. His younger brother Daniel is now on the brink of becoming a Neo-Nazi. Derek tries to save Daniel from a similar fate.

Why I'll never watch it again: At the beginning of the film when Derek kills one of the men, you hear a crunch. Yes, a crunch. I then missed the rest of the movie while vomiting in the bathroom for three straight days. When I was finally able to watch the rest, a great movie took place. But, I heard the crunch. Also, the director and Ed Norton are complete dicks. The director wanted to continue filming and change the film entirely, but the producers wouldn't allow it. After filming had finished, Ed Norton made demands of adding more of him into the film. Although it worked out for the best, it was a dick move.

8. What Dreams May Come

What it's about: The film focuses on a man (Robin Williams) loses his children in a car accident and later loses his own while trying to save another man's life. His wife goes into deep depression and decides to commit suicide. Robin Williams then must save her soul.

Why I'll never watch it again: The movie is sad beyond means with romance trickled in. If I wanted to go through depression because of a movie I'd watch Titanic. That, and the scary hell arms.

7. One Flew Over the Cuckoo's Nest 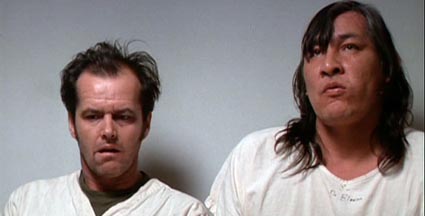 What it's about: R.P. McMurphy (Jack Nicholson) pretends to be insane, but the plan backfires and is put into an asylum. He makes a friend, but causes problems for the entire staff, especially Mrs. Ratched. At conclusion, his problem causing ways are put to an end by "other means."

Why I'll never watch it again: Since watching the film I have not looked at mental institutions the same way. I felt for McMurphy and wanted to save him from Mrs. Ratched. Maybe I'm just as bad as him.

What it's about: A Civil War veteran, Captain Nathan Algren (Tom Cruise), trains the Emperor's troops to use modern weapons as they prepare to defeat the nations last samurai. Algren is captured by the samurai and learns about their customs and code of honor.

Why I'll never watch it again: Besides the fact that Tom Cruise annoys the hell out of me, this film is almost a complete ripoff of Dances With Wolves. The film is not only historically inaccurate (the Prussians assisted the Japanese in modernizing their weapons), but also would have been ten-thousand-gillion times better without Tom Cruise's character.

What it's about: A gang of teenagers in futuristic Britain go on rampages at night, raping and beating victims. After one man, Alex, quells an uprising, the gang kicks him out and leaves him for the police. Alex agrees to "aversion therapy" to shorten his sentence. After his sentence has ended, he hates violence, but the rest of his former gang are out to kill him.

Why I'll never watch it again: The film shows the brutal rampages, making any normal human being feel ill. So the police do the same to Alex. Each time he sees violence or thinks violence he gets ill. To do this, Alex is strapped to a chair and forced to watch gory acts repeatedly after taking a special pill that causes him to get sick as he is forced to watch the films. After his prison sentence he is confronted by violent men, whom he is unable to protect himself against since he feels sick. Alex is unable to think or live his life as a normal human being. So what am I getting at? I felt sympathy for a murderer and rapist.

Why I'll never watch it again: I don't smoke pot. Even if I did, I don't think there is enough mary-jane in the world for this movie.

What it's about: In 1944 fascist Spain, a young girl is sent along with her pregnant mother to live with her stepfather, a captain of the Spanish army. During the night, she meets with a fairy who takes her to an old faun in the center of the labyrinth. The faun tells her she is a princess, but must prove her royalty by surviving three gruesome tasks.

Why I'll never watch it again: The faun still gives me nightmares. The overall story grips me into wondering if the girl is insane or special. Who knows, maybe she is both.

2. Mr. Brooks
What it's about: Earl Brooks (Kevin Costner) is a respected businessman who was recently named Portland's Man of the Year. However, he has a secret: he is a serial killer known as the Fingerprint Killer. He has been keeping his murders under control by attending AA meetings for the past two years, but now his alter ego, Marshall, has re-appeared and is pushing him to kill again. When he finally does, he is seen and photographed by another man (Dane Cook) who also has a murder fetish.

Why I'll never watch it again: The movie humanizes Mr. Brooks in a way that makes I sympathized for him. Not only was I rooting for Marshall to go away, but I was also rooting for Mr. Brooks not to get caught.

What it's about: Armand Goldman (Robin Williams) owns a popular drag nightclub in South Miami Beach called The Birdcage. His son, Val, comes home to announce his engagement to Barbara Keely, daughter of a US Senator. The Senator's family descends upon South Beach to meet with Val and his father and "mother."

Why I'll never watch it again: It is a big gay, homosexual, banana in the butt movie. And I enjoyed it. Enough said.