Funny Quotes From Knocked Up

Knocked Up is a comedy movie starring Seth Rogen, Paul Rudd, and Katherine Heigl. This movie is often considered as the movie to push the three of them to become the 2000s comedy kings (queens). Knocked Up is some serious fun with many funny lines and quotes. Listed below are a just a few of the great lines from the film. Of course, if you don't know about Seth Rogen films, you might want to stay away from this one. He's known to have a pretty sick sense of humor. However, if you are into that, it's fantastic! 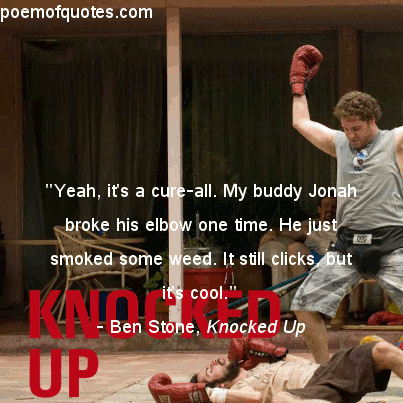 He's playing fetch... with my kids... he's treating my kids like they're dogs.
Debbie I'm going to murderball you!
Jonah Fuck me in the beard.
Martin Marriage is like a tense, unfunny version of Everybody Loves Raymond, only it doesn't last 22 minutes. It lasts forever.
Pete I wish I liked anything as much as my kids like bubbles.
Pete Yeah, it's a cure-all. My buddy Jonah broke his elbow one time. He just smoked some weed. It still clicks, but it's cool.
Ben Stone Are you the lady who doesn't realize she's pregnant until she's sitting on the toilet and the kid pops out?
Debbie Your face looks like Robin Williams' knuckles.
Ben Stone You hear that, Ben? Don't let him near the kid, he wants to rear your child!
Jason Well. I think a stork, he umm, he drops it down and then, and then, a hole goes in your body and there's blood everywhere, coming out of your head and then you push your belly button and then your button falls off and then you hold your butt and you have to dig and you find the little baby.
Sadie, when asked where babies come from Related Hilarious Movie Quotes:
Balls of Fury
Hitch
I Now Pronounce You Chuck and Larry