Even though I've never ridden on a motorcycle, I can imagine how thrilling it must be, especially on a highway. Wind blowing across my body, mind at ease, and controlling the road, I can see it now. Perhaps someday. Until then, I'll just stick with movies.

The following quotations are some great humorous quotes about motorcycling. They include quotes from writers, philosophers, actors, and famous motorcyclists. Enjoy! 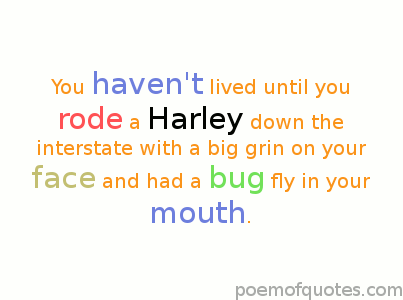 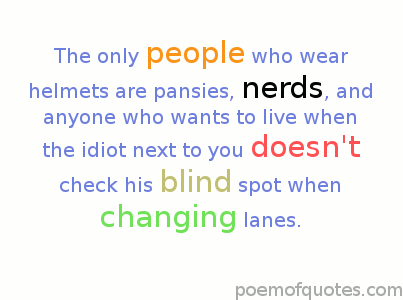 Faster, faster, faster, until the thrill of speed overcomes the fear of death...
Hunter S. Thompson Why are motorcycle dealers closed on Sundays? Because Sunday is for worship... Catholics go to church, Motorcyclists go to the track.
Justin Skalka 98% of all Harleys ever sold are still on the road. The other 2% made it home.
Anonymous I'd rather be riding my motorcycle thinking about God than sitting in church thinking about my motorcycle.
Anonymous I believe many Harley guys spend more time revving their engines than actually driving anywhere; I sometimes wonder why they bother to have wheels on their motorcycles.
Dave Barry People are more violently opposed to fur than leather because it's safer to harass rich women than motorcycle gangs.
Alexei Sayle Ever since the young men have owned motorcycles, incest has been dying out.
Max Frisch And I to my motorcycle Parked like the soul of the junkyard Restored, a bicycle fleshed With power, and tore off Up Highway 106 continually Drunk on the wind in my mouth Wringing the handlebar for speed Wild to be wreckage forever.
James Dickey You know, Motorcycle Diaries has no incredible stories, no sudden plot twists, it doesn't play that way. It's about recognizing that instance of change and embracing it.
Gael Garcia Bernal Page: 1 | 2 | 3