Everyone loves women. Even though many of us have had issues with them, we can't help but love them. They can do whatever they want to us, but we just can't stop going back to them. Even homosexuals seem to love them as friends. Whatever the reason, we just can't get enough. Here are some of the very best hilarious women quotes. 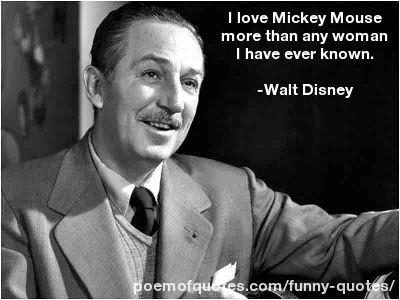 As long as a woman can look ten years younger than her own daughter, she is perfectly satisfied.
Oscar Wilde When women kiss it always reminds me of prize fighters shaking hands.
H.L. Mencken When a woman becomes a scholar there is usually something wrong with her sexual organs.
Friedrich Nietzsche Show me a woman who doesn't feel guilt and I'll show you a man.
Erica Jong I only know that people call me a feminist whenever I express sentiments that differentiate me from a doormat or a prostitute.
Rebecca West Women add zest to the unlicenced hours.
Allen Thomas When women go wrong, men go right after them.
Mae West A woman's mind is cleaner than a man's -- That's because she changes it more often.
Oliver Hereford My wife is the sort of woman who gives necrophillia a bad name.
Patrick Murray As Miss America, my goal is to bring peace to the entire world and then get my own appartment.
Jay Leno Page: 1 | 2 | 3 Related Female Quotes:
About Girls
About women and communication