Funny Quotes From School of Rock

School of Rock is a great movie. It's a bit like other Jack Black movies, but the fact that it is based in a school with great child actors is a huge plus. There are many quality scenes and great lines. Of course, at the beginning of the show, it's hard not to feel sorry for the school kids and the parents. Who would want their child to be taught by a nobody?

Below are some funny quotes from School of Rock. Enjoy! 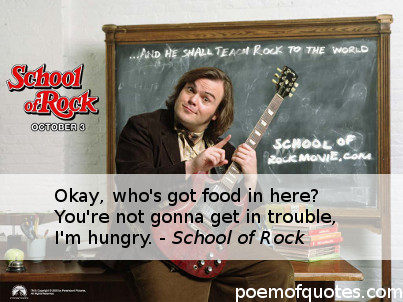 Ned: Patty, come on, I'm on this.
Patty: Oh, you're on. Ned: Dewey, I'm not paying your share of the rent, so, I don't know, maybe you should sell one of your guitars or something.
Dewey Finn: What? Would you tell Picasso to sell his guitars? Dewey Finn: Read between the lines, Theo. Read between the lines! Dewey Finn: You guys, you know what? You're nuts. You're all nuts. You've been focused so hard on making it, you forgot about one thing. It's called the musuc. And I don't even care. You know what? So what. I don't want to hang out with a bunch of wannabe corporate sellouts. I'm gonna form my own band. And we are gonna start a revolution. Okay? And you're gonna be a funny little footnote on my epic ass. Dewey Finn: Okay, who's got food in here? You're not gonna get in trouble, I'm hungry. Dewey Finn: Freddy, what do you like to do? Freddy: I don't know, burn stuff? Rosalie Mullins: I'm sorry to interrupt, but Miss Lemmons said she heard music coming from the classroom. Dewey Finn: Music? Uh, music. I haven't heard any music. Uh-oh, you know what? Miss Lemmons must be on crark, right, kids? Dewey Finn: [singing] Math is a wonderful thing. Math is a really cool thing. So get off your ath. Let's do some math. Math, math, math, math, math. Dewey Finn:Tomorrow is the big day, so get your rest. No late parties, drinking tequila and trying to get lucky. Dewey Finn: My name is Dewey Finn. And, no, I'm not a licensed teacher, but I have been touched by your kids. And I'm pretty sure I've touched them. Page: 1 | 2 Related Hilarious Movie Quotes:
Meet the Robinsons
Mr. Woodcock
Pineapple Express
The Rocker