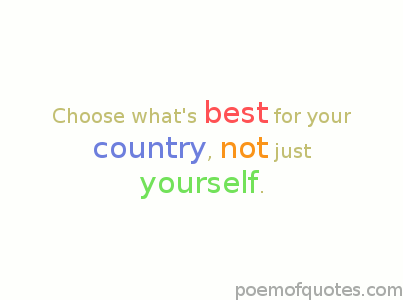 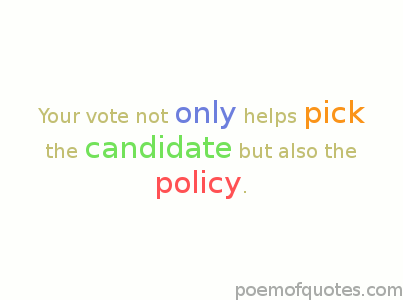 According to the U.S. Census, the most common reason people give for not voting is that they were too busy or had conflicting work or school schedules.
Jeff Miller American youth attributes much more importance to arriving at driver's license age than at voting age.
Marshall McLuhan Americans of our own time - minority and majority Americans alike - need the continued guidance that the Voting Rights Act provides. We have come a long way, but more needs to be done.
Elijah Cummings As long as Florida remains a swing state, Cuban exiles in Florida will remain a very powerful voting bloc.
Joshua A. Tucker As people do better, they start voting like Republicans - unless they have too much education and vote Democratic, which proves there can be too much of a good thing.
Karl Rove Democracy must be something more than two wolves and a sheep voting on what to have for dinner.
James Bovard Don't forget to vote for Bill Clinton and Al Gore. Stay home if you're voting for Dole.
Eleanor Mondale Every citizen of this country should be guaranteed that their vote matters, that their vote is counted, and that in the voting booth, their vote has a much weight as that of any CEO, any member of Congress, or any President.
Barbara Boxer I am sure that every one of my colleagues - Democrat, Republican, and Independent - agrees with that statement. That in the voting booth, every one is equal.
Barbara Boxer I believe that voting is the first act of building a community as well as building a country.
John Ensign I can make them voting machines sing Home Sweet Home.
Earl Long I hope that no American will waste his franchise and throw away his vote by voting either for me or against me solely on account of my religious affiliation. It is not relevant.
John F. Kennedy I try hard to convince them it's important - but there's a history of discomfort with minorities voting in some parts of this country, so most especially the older people have to get accustomed to it.
Eddie Bernice Johnson Bad officials are elected by good citizens who do not vote.
Andrew Lack If voting changed anything, they'd abolish it.
Ken Livingstone The great thing about democracy is that it gives every voter a chance to do something stupid.
Art Spander Constantly choosing the lesser of two evils is still choosing evil.
Jerry Garcia The ignorance of one voter in a democracy impairs the security of all.
John F. Kennedy There can no longer be anyone too poor to vote.
Lyndon Baines Johnson All voting is a sort of gaming, like checkers or backgammon, with a slight moral tinge to it, a playing with right and wrong.
Henry David Thoreau Page: 1 | 2 | 3 | 4 Related Political Quotes:
Election day
For Democrats
For Libertarians
For Republicans
More holidays