Seinfeld is one of the funniest television series of all-time. Larry David and Jerry Seinfeld are comedic masterminds during this series run (Larry actually continues his genius later on with the comedy Curb Your Enthusiasm). Sadly, Jerry hasn't been able to do much of anything besides commercials and starting a few other shows which were gigantic failures. Nonetheless, Seinfeld will forever be remembered as "the show about nothing" but still meant everything to its viewers.

Below are some funny quotes from the series. 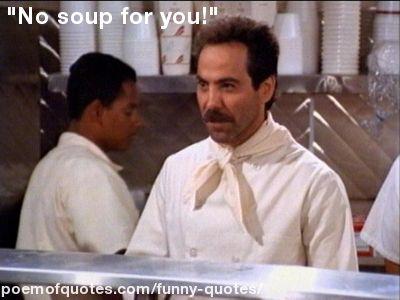 Kramer goes to a fantasy camp. His whole life is a fantasy camp. People should plunk down two-thousand dollars to live like him for a week. Do nothing, fall ass-backwards into money, mooch food off your neighbors, and have sex without dating. That's a fantasy camp!
George, "The Visa" You always have to know everything that's going on, don't you?
Jerry to Kramer, "The Parking Spot" Yeah, I eat the whole apple. The core, stem, seeds, everything.
Kramer, "The Baby Shower" Um, excuse me, I... I think you forgot my bread.
Bread, two dollars extra.
Two dollars? But everyone in front of me got free bread.
You want bread?
Yes please.
Three dollars!
What?
No soup for you!
George and the Soup Nazi, "The Soup Nazi" I don't think I'm special. My mother always said I'm not special.
George, "The Good Samaritan" What? Was it something I said?
She's a virgin. She just told me.
I didn't know.
Well, it's not like spotting a toupee.
Elaine and Jerry, "The Virgin" I'm much more comfortable criticizing people behind their backs.
George, "The Engagement" Have you totally blocked out the entire time we were a couple?
Elaine to Jerry, "The Stakeout" Are you close with your parents?   Well, they gave birth to me and... yada yada yada... Yada what?   Yada... yada... yada...
Mary and George, "The Yada Yada" Why do I get bananas? They're good for one day...
Jerry, "The Junior Mints"