Quotes From the Bible for Baptism and Christening

Baptism is an important part of every Christian's life. Below is a list of quotes from the Christian Bible you can use for your baby's baptismal and christening. 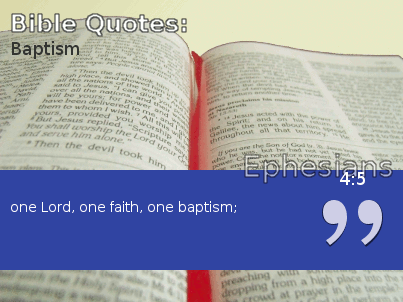 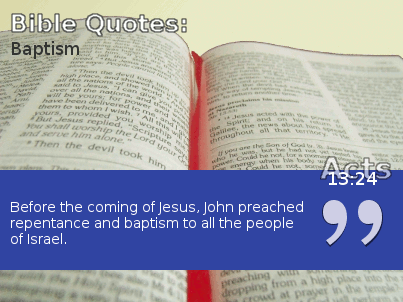 Therefore we are buried with him by baptism into death: that like as Christ was raised up from the dead by the glory of the Father, even so we also should walk in newness of life.

Romans 6:3-4 Buried with him in baptism, wherein also ye are risen with him through the faith of the operation of God, who hath raised him from the dead.
Colossians 2:12 He that believeth and is baptized shall be saved; but he that believeth not shall be damned.
Mark 16:16 And now why tarriest thou? arise, and be baptized, and wash away thy sins, calling on the name of the Lord.
Acts 22:16 Then Peter said unto them, Repent, and be baptized every one of you in the name of Jesus Christ for the remission of sins, and ye shall receive the gift of the Holy Ghost.
Acts 2:38

But when they believed Philip preaching the things concerning the kingdom of God, and the name of Jesus Christ, they were baptized, both men and women.

Then Simon himself believed also: and when he was baptized, he continued with Philip, and wondered, beholding the miracles and signs which were done.

Acts 8:12-13 Then they that gladly received his word were baptized: and the same day there were added unto them about three thousand souls.
Acts 2:41 And John also was baptizing in Aenon near to Salim, because there was much water there: and they came, and were baptized.
John 3:23

John did baptize in the wilderness, and preach the baptism of repentance for the remission of sins.

And there went out unto him all the land of Judaea, and they of Jerusalem, and were all baptized of him in the river of Jordan, confessing their sins.

In those days came John the Baptist, preaching in the wilderness of Judaea,

And saying, Repent ye: for the kingdom of heaven is at hand.

For this is he that was spoken of by the prophet Esaias, saying, The voice of one crying in the wilderness, Prepare ye the way of the Lord, make his paths straight.

And the same John had his raiment of camel's hair, and a leathern girdle about his loins; and his meat was locusts and wild honey.

Then went out to him Jerusalem, and all Judaea, and all the region round about Jordan,
And were baptized of him in Jordan, confessing their sins.