Oh computer nerds, you so funny! Ok, I can't really say anything because I'm one of them. Some people might say they are proud of that, but I'm not, really. People always asking me to fix their computer, people assuming I know something about random software, people asking me to scan their computer for viruses. It's annoying. Us nerds need to unite against the computer illiterate!

Anyway... below are some hilarious quotes for computer nerds. 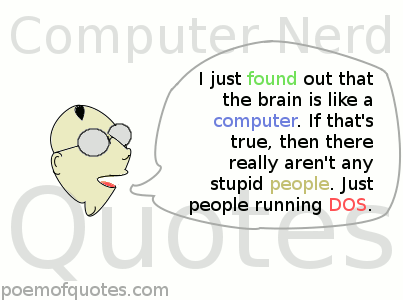 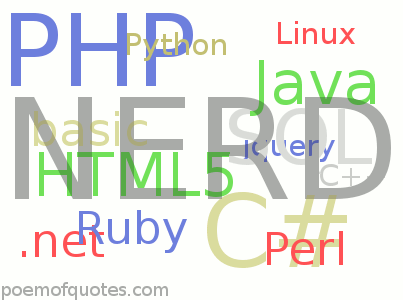 User, n. The word computer professionals use when they mean "idiot."
Dave Barry Computer Science is no more about computers than astronomy is about telescopes.
Edsger W. Dijkstra As network administrator I can take down the network with one keystroke. It's just like being a doctor but without getting gooky stuff on my paws.
Scott Adams, Dogbert If you have any trouble sounding condescending, find a Unix user to show you how it's done.
Scott Adams If builders built buildings the way programmers wrote programs, then the first woodpecker that came along would destroy civilization.
Weinberg's Second Law Jesus saves! The rest of us better make backups.
Anonymous The best way to accelerate a Macintosh is at 9.8m/sec/sec.
Marcus Dolengo There are two major products that came out of Berkeley: LSD and UNIX. We do not believe this to be a coincidence.
Jeremy S. Anderson The trouble with the Internet is that it's replacing masturbation as a leisure activity.
Patrick Murray Page: 1 | 2 | 3 | 4 Related Hilarious Quotes:
Computers
Programming
SEOs
Technology